The high frequency data is showing signs that the economy is starting to open again after the Covid-19 impacts across the Sunbelt states and California. This rebound is reflected in the capital markets where the stock market saw recent gains in more economic-sensitive industries, while the high-yield bond market had very strong issuance volume.

The markets embraced risk and cyclical rebounds this week.

The markets favored cyclical companies on the back of better economic data, a sign that the U.S. economy has been rebounding. The more domestic-oriented Russell 2000 and the more economically sensitive Dow Jones Industrial Average performed well. Additionally, for the week, more cyclical sectors such as Industrials, financials and materials performed best in the S&P 500 while technology-oriented sectors fared poorly.

Concurrently, this week was the second busiest week on record for issuing high-yield (a.k.a. junk) bonds – a sign that the market believes that any weakness in securities prices would prompt the Fed to step in. The Fed already has a program in place to purchase high-yield bonds with specific, pre-defined attributes, leading investors to buy these new issues and create liquidity in this corner of the financing market.

CDX Index – tracking the cost to bondholders to insure against default of high yield bonds.

We are starting to see the economic rebound improve the Covid-19 flatlining in June and July. As the OpenTable diners traffic in the chart below shows, Consumers are becoming more economically active after SunBelt states and California experienced a re-emergence approximately eight weeks ago.

Similarly, the NY Fed’s weekly tracker for economic activity has now reached a level not seen since late March, after stalling during the summer:

The high frequency data confirms this. Results are showing continued progress across the economy – all factors we track improved month over month and week over week. While results are still down significantly compared to pre-Covid levels, the healing is happening. 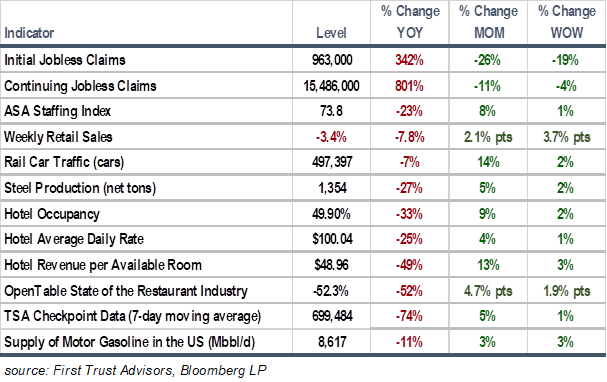 We also received better than expected initial and continuing unemployment claims filings this week. While the levels remain incredibly elevated compared to history, this week as the first in 21 weeks that initial claims were below 1 million. We have had consecutive strong weeks of trending down after 2 months of flat results when accounting for the Pandemic Unemployment Assistance (PUA).

Leisure/Travel: U.S. hotel occupancy has risen week over week for 16 of the last 17 weeks

However, this is not uniform across the country.  Manhattan apartment rents fell by the most since October 2011 after having been trending up the prior two years. 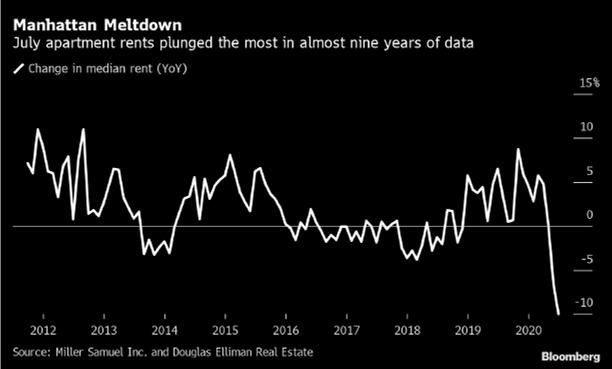 Earnings & Wages – year over year increased around 4% in July

International:
Eurozone – reported its steepest drop in employment on record in Q2.

China – July Industrial Production was +4.8% y/y, same as June and below 5.2% expectations.

To reach Simeon, call (917)733-9141
X
Aprio uses cookies to ensure you get the best experience on our website.GOT ITLearn More