Ahead of the holiday weekend, the employment and manufacturing numbers showed the rebound continues, though the headline employment numbers mask weakness related to Pandemic Unemployment Assistance (PUA) filings. The market, which had been strong through August, took a breather, led by the large tech companies which had surged throughout the year.

The stock market’s decline, notably in the large cap technology companies that led the strong rebound over the last few months, captured headlines. In fairness, the selloff in the Nasdaq and S&P 500 returned to the levels of two weeks ago. The “risk off” mentality can be seen in the price of oil, which declined 7% for the week.

The top performing sector of the S&P 500 was Materials, which has been strong all quarter. The next two in line – Utilities and Financials – both of which have been out of favor and are strong dividend payers.

We saw investors shedding risk in the bond market too, as the spreads of high yield bonds widened (a sign that investors want to be paid more for their risks relative to risk-free U.S. government bonds).

This week marked strong August economic data from the manufacturing sector (which we will focus on), improving retail sales and better than expected employment figures. Although not without some concerns when we peel back the onion. 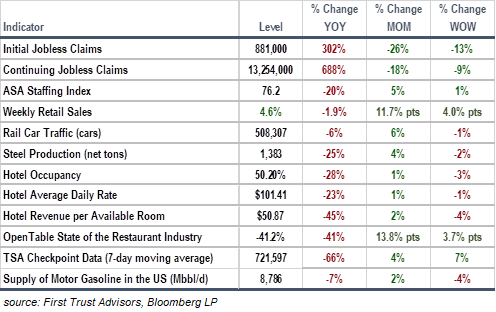 Focusing on monthly data shows the economy continues to rebound, with strong improvements in industrial activities (Rail Car traffic, Steel production) and increases in aspects of consumer lifestyles such as dining at restaurants and air travel. Hotels continue to lag the recovery (note: week-to-week comparisons are impacted by the Labor Day holiday).

The headline employment numbers were strong:

One concern – These figures do not include the data for those still receiving Pandemic Unemployment Assistance (PUA). PUA filings have been increasing weekly throughout August.

As a result, the total employment picture has not shown much improvement over the last month. 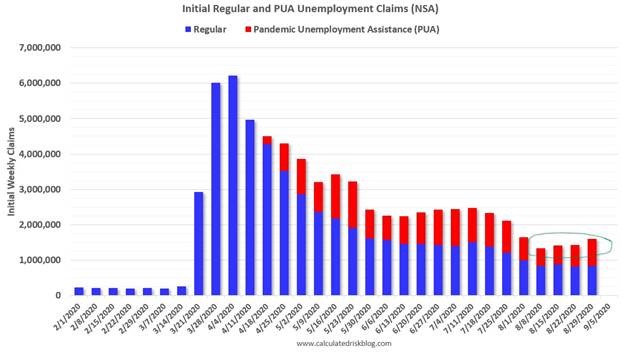 Focus of the Week – Manufacturing & Industrial

We had strong manufacturing and industrial reports for the month of August, showing that sector is on the mend. As mentioned before Rail Car Traffic and Steel are increasing.

With these surveys, a reading above 50 is a sign of expansion, below 50 is contraction.

ISM surveys were better than expected

To reach Simeon, call (917)733-9141
X
Aprio uses cookies to ensure you get the best experience on our website.GOT ITLearn More